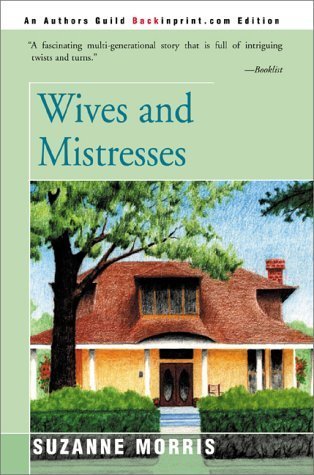 Against the backdrop of Houston, Texas, from barren swampland to dazzling contemporary metropolis, Wives and Mistresses spans several generations in the tempestuous lives of two prominent famiies, the Leiders and the Gerrards. It is a dynastic tale as seen through the eyes of four heroines whose friendship and loylty are locked within the bitterness of a century-old rivalry.

There is Alvareda Gerrard, whose strength and vision throughout the generations hold the clans both together and apart.... Elzyna Leider, the gentle victim of a loveless marriage who dares to escape the brutal violence of her husband by casting herself into the arms of a seductive Frenchman... Senta Farrish, whose fiery passion for the one man she cannot possess drives her into a heart-breaking and dangerous marriage with another... And Robin Farrish, the beautiful and rebellious Leider great-granddaughter, whose true birthright lies shrouded in mystery-- and who holds the key to the long-buried truths that have haunted the families for over one hundred years.

Excerpt from WIVES AND MISTRESSES:

--from Alvareda--1887-1901
Sometimes the memory of a day is imprinted on the mind not because of a certain event by which a change is marked, but because in its simple regularity lies the last vestige of sameness, of things that once were, and will never be again.

It was a beautiful day. Temperatures had been up in the nineties all week, and when Neal awoke that morning he said, "I need some time off, and we could all use a dip in the Gulf before the season's over. Let's pack up and go to Galveston for the weekend..."

--from Elzyna--1905-1914
Hail Mary, full of grace; the Lord is with thee: blessed art thou among women, and blessed is the fruit of thy womb, Jesus. Holy Mary, Mother of God, pray for us sinners, now and at the hour of our death...

There is a great deal for which to be thankful, and I must remember this tonight and every other night, and go on. If I should hear the sound of a train rumbling down the tracks a few blocks away, I must be strong enough to cover my ears and look into the comforting log fire, and not think of New Orleans and all I cannot have, all for which hope is gone. I must think of the children who, thank God, have not been harmed or taken from me. I must think of this house, which I have loved since I was a child. These are the major blessings. And there are the small, daily things, like sitting out on the porch in springtime and watching the four o'clocks bloom, and not feeling afraid anymore.

--from Senta--1928-1940
If anyone knew of my connection with the tragedy that happened three hours ago, they would not believe I am at least partially innocent. How could I know I made a deal with the devil until I got caught in the middle of it? Now I wish, oh, how I wish, I could take everything back, all that I said, and all that I did, instead of just this one piece of evidence in my hand.

--from Robin--1960
It is four o'clock on Tuesday afternoon. Outside the sky is cloudless and blue, but the wind is chilly and persistent. Now and again it startles the bare limb of the tree near the window and causes it to scratch the glass like fingernails. I am sitting in the middle of my bedroom floor, with the gas heater flaming nearby, and whenever I hear the scratching I stop and look up and listen. As a child, I sat in this place many times and listened for the voice that I cannot help but listen for now. Then, I was paying for the mistakes of others; now I am paying for my own, because I never learned to stop counting on some things and some people.